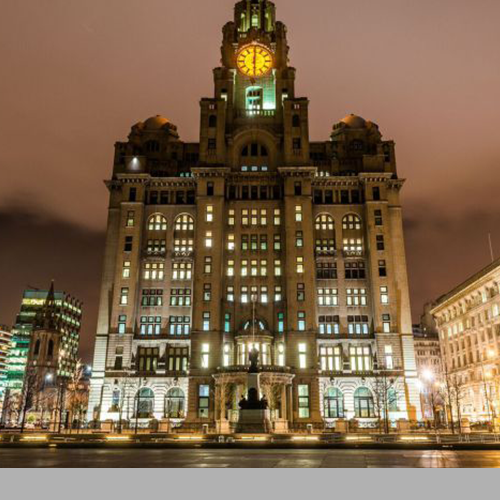 Construction began on the Royal Liver Building in 1907, when it was designed as an office for the 6,000 employees of the Royal Liver Group. Designed by Walter Aubrey Thomas, the foundation stone for the building was laid on 11 May 1908 with the building opening its doors just three years later on 19 July 1911.

The innovative construction was one of the first in the world to be made using reinforced concrete, in fact some people thought it would prove impossible to build!

The building overlooks the River Mersey, and forms one of the ‘Three Graces’ along with the Port of Liverpool Building and the Cunard Building. It’s considered a hugely important Liverpool icon, reflected in its Grade I listed building status.

The Royal Liver Building stands at 90 m (300 ft) tall, with 13 floors all benefitting from great views over the waterfront. Crowning it is a pair of clock towers, which were designed to allow passing mariners to tell the time. At 7.6 m (25 ft) in diameter these clocks are even bigger than those of arguably the most famous clock tower around, Big Ben!

Atop each tower stand the mythical Liver Birds, designed by Carl Bernard Bartels. Popular legend has it that while one giant bird looks out over the city to protect its people, the other bird looks out to sea at the new sailors coming in to port. Another interesting story is that the Liver Birds face in different directions because one is male, looking inland to see if the pubs are open, whilst the other is female, looking out to sea to see if there are any handsome sailors coming up the river! It is also often said that if one of the birds were to fly away the city of Liverpool would cease to exist.

The Royal Liver Building still houses the head office for the Royal Liver Assurance. The building’s centenary was celebrated in 2011, with the internationally acclaimed artist group The Macula commissioned by the Liverpool city council to create a projection mapping event for this occasion.