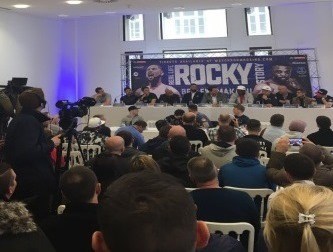 On Thursday 26th, we welcomed another great sports star – famous Liverpool boxer Tony Bellew. Tony won the World Championship Belt that Sunday and hosted his press conference in partnership with Matchroom Boxing. The Venue was given a rare blue makeover with many media outlets such as Sky Sports in attendance.

The press conference began with welcome tea and coffee. The guests then moved into The Bertie Suite where the conference commenced. The conference saw questions asked about what their hopes were for the event.

It was apparent that the magnitude of the event began to dawn both fighters, as each chose their words carefully. Bellew didn’t give the gregarious out-spoken approach fans have become so accustomed to and was rather calm and considered in his delivery. The Liverpool born boxer quoted “my lifetime’s work all goes into those 36 minutes, everything else in the world stops and then it’s just about me and him on Sunday”. South African Illunga Makubu described the fight as a miracle for him and added that he will follow his own dream of winning the WBC world cruiserweight belt.

The outcome of the event, held at Goodison Park, saw Bellew knock out Makabu in the third round to win the title. Another incredible sporting event held at The Venue.