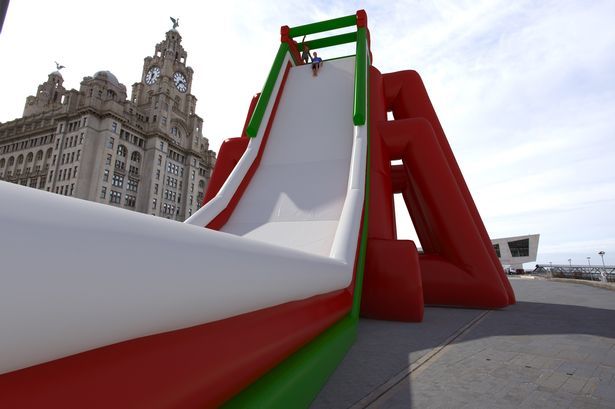 Liverpool is a city renowned for its culture; this year the city welcomes a huge range of unmissable events, from music festivals to a truly unforgettable obstacle course! Here are eight reasons to visit us this year.

Liverpool One has teamed up again this year with Bitter & Twisted, the team behind last year’s beach bar, to create the Boardwalk Bar and Claws! Seafood shack. The concept is inspired by boardwalk bars on the Florida coastline. Created using recycled shipping pallets, the pop-up also pays homage to Liverpool’s maritime heritage. With a choice of summer cocktails and fresh seafood it’s the perfect after-work and weekend hangout for sundowners & streetfood.

Dazzle on deck the transformed Mersey Ferry Snowdrop, the latest commission for the Liverpool Biennial by the legendary British pop artist, Sir Peter Blake. He is perhaps most famous for designing the cover of The Beatles’ album, ‘Sgt. Pepper’s Lonely Hearts Club Band’ (1967). This First World War Centenary Art Commissions and Tate Liverpool project is the third in the series of Dazzle Ship commissions and the first to be a working vessel. On-board there will be an exhibition where visitors can learn more about the history of dazzle camouflage and the role that the Mersey Ferries took in the WW1. What better way to experience Liverpool’s iconic waterfront than on a travelling artwork.

This exhibition, Jackson Pollock: Blind Spots, journeys through the artist’s pioneering techniques. From his radical ‘drip’ paintings to his lesser known work, ‘black pourings’ which mark a departure in the artist’s approach and, as the exhibition argues, a blind spot in the critical conversations that surround it. Presented alongside the black pourings will be drawings from the same period, as well as a number of virtually unknown and rarely seen sculptures, offering a new perspective on the work of one of the most famous artists of the twentieth century.

“Build Your Own: Tools For Sharing” Exhibition is in collaboration with DoESLiverpool. This DesktopProsthetics project utilises 3D printers to create functional elements of the open source design ‘The Raptor Hand’. These 2 upcoming workshops will provide the opportunity for people to create, experiment and understand what prosthetics are and how access to rapid prototyping and open source digital making tools can help local people with real needs.

Beatle fans from across the globe are invited to come together for International Beatleweek held in the Fab Four’s home city. As well as live gigs, there are exhibitions, memorabilia sales, special guest speakers & sightseeing tours to pay homage to the most influential band and to the city that shaped them.

Liverpool hosts Europe’s largest free music event: Liverpool International Music Festival.  Set in the beautiful expansive grounds of Sefton Park, it provides a family-friendly al fresco party. Headliners this year are Basement Jaxx, Labyrinth and local heroes Echo & The Bunnymen performing with the Royal Liverpool Philharmonic Orchestra, as well as showcasing the latest upcoming music talents. The theme of ‘Music Migrants’, a commissioned collaborative project, will explore the evolution of music through the movement of people, culture and, of course, music.

This 5k race has ten huge inflatable obstacles which participants need to navigate their way through, including Europe’s biggest inflatable slide! The Thriller slide is 53m long and higher than 3 London buses while the course also includes a gigantic ball pit, massive foam pit and a mammouth climbing wall. It is the first of its kind to be hosted in Liverpool at the Aintree Racecourse. The event will raise money for Alder Hey Children’s Charity’s £30m new hospital appeal and the R Charity £10m appeal for the New Royal. Join the fun and BeGungHo!

Winner of NME’s award for Best Small Festival, Psych Fest has cemented itself as a way of life for music lovers the world over in just 3 short years. The 2-day festival brings together experimental bands; kaleidoscopic films and colourful arts & crafts in the ultimate platform for freedom of expression. It will take place at Liverpool’s newest hotspot; Camp & Furnace – a converted former industrial furnace in the city’s buoyant Baltic Triangle.The festival is set to expand your mind and enrich your very being.

Liverpool is a hub for exciting and unique events and The Venue at the Royal Liver Building is not exception to this. Located on the iconic riverfront, the event space offers stunning panoramic views and an ideal setting for entertaining. This flexible venue offers a range of contemporary, gallery-style rooms, ideal for corporate and private events. For a unique vantage point, there is special access to the Liver Building roof for that priceless photo opportunity. Contact us now to find out how we can help create the perfect event for you.